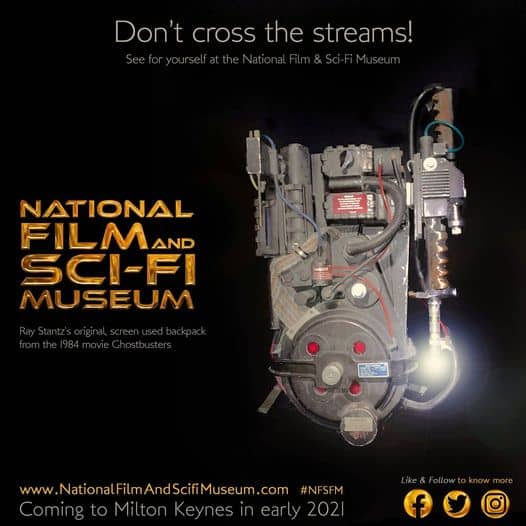 The National Film & Sci-Fi Museum will be opening to the public in 2021!

The museum is dedicated to the preservation, restoration and exhibition of the art, skills and dedication that goes into delivering some of the world’s most successful films and tv shows.
These artefacts and relics are created and used for only a very short time to make those films before being discarded, and most are never seen again by the audience who cares so much about them. The National Film & Sci-Fi Museum is dedicated to saving these amazing creations and making them available for everyone to see and enjoy, and at the same time telling the story of their creation and the people who helped to revolutionise the way we see films today. Our team of volunteers are very busy working on the exhibits and displays and working with a team of experts from the film industry on the monumental task of bringing them to life, and sharing the magic of the art of film making.

We are a Registered Charity and as such everything we raise will go back into an extensive restoration program, as well as the running of the museum, so that future generations of fans can see the marvels of entertainment history in a dedicated permanent home.

The museum will feature an extensive collection of props, costumes, art, photos, and footage from some of the biggest film and tv productions. There will be something for everyone, with many artefacts being shown for the very first time to the public. Displays from Star Wars to Indiana Jones, James Bond to Ghostbusters, Harry Potter to Marvel, and over 100 films and shows we all love and have been brought up with, will be on view in the museum. So if you want to see Darth Vader’s screen used mask, James Bond’s Walther PPK gun, the grail cup from Indiana Jones, or a Cyberman helmet from Doctor Who, they will all be on view here! The museum will also host presentations, creators talks, guest appearances and signings, as well as dedicated events and talks, special educational activities for school groups, and corporate experiences. The National Film & Sci-Fi Museum is a cathedral dedicated to the blockbuster, and will be a destination for all fans of film and tv. A place to be inspired, learn, and amazed by the unique artefacts and art that cannot be seen anywhere else in the world.

There will be something for everyone to see and learn more about at the National Film & Sci-Fi Museum.